The second post in a series “Takeaways from the Land Investment Expo in Des Moines Iowa January 25, 2019”.

Mr. Zeihan started his talk by stating that World trade was started by people just talking about what they wanted. Isn’t that generally what we think about when we trade things? If I want corn on my farm in North Carolina, I could go to an Illinois farmer and buy it, ok maybe it’s not that easy. I need a middle man so the grain elevator gets involved. Then they involve someone who can transport it to my final destination in NC; the USDA gets involved and grades it before shipment and so on. There is more to trade than just talking but that’s how it all starts.

In his opinion Bush 41 was the best President in our lives for World Affairs. He was on a first name basis with most of the World leaders and was well respected by them. After HW, the US World affairs simply fell apart. Clinton (probably the smartest President in the last 50 years, his quote not mine) was more interested in internal affairs. Bush 43’s Presidency was overwhelmed by 911. Obama interestingly was not a people person and just ignored many facets of World affairs. Zeihan’s comment was that Obama literally did not talk with his cabinet very much at all. He was a great orator but not much for foreign policy. The whole story has not been written about Trump, but all indications are that he wants to win at all costs. What that means long term is yet to be decided.

This all led up to what I found to be the most interesting 20 minutes of the talk. Here we are post SOTU where President Trump stated that we are energy independent. Ironically we heard this fact two weeks earlier in Iowa. On any given day the US is the number 1 energy producer in the world. As a child, we were drilled on a regular basis that our energy supply was so finite that we were in danger of exhausting it in my lifetime! What a scary thought. New methodology in extraction has changed this idea but also new methods of exploration have been a game changer!

He then elaborated why the United States is a world power. Similar to Gartman, he talked about military supremacy. But more than our military power, our economic power sets us apart from other world powers. Our GDP is less dependent on other countries. We have energy independence now and into the future. Most importantly our demographics in the US are a strength that is unmatched by other rival counties.

When compared to other significant World economies, the US has the idea mix of demographics. We have two major power age generations. The baby boomers have accumulated wealth and the millennials have the desire to purchase goods and services. As the boomers liquidate their wealth the younger generation will be there to consume it through goods and services.

Other countries discussed were India (where their demographic are primarily young, only workers no wealth), Japan (where their demographics are primarily old, only wealth and no workers) and Korea (where their primary demographic is centered in middle age, not enough wealth or workers). The charts that were presented (shown below in my pictures) take a little study but are very powerful once digested. On the left of each chart is the female population, on the right are males. The Y axis is ages from 0-100 in 5 year increments. Note the stark differences in the charts.

What I expected was this 45 minute talk would be “boring”. His talk inspired me enough to start to read his books for more information. What I received was serious knowledge to ponder and a renewed energy and enthusiasm for the United States! In my notes I had written, “We did this all in less than 250 years! What can we do in the next 100 years?” 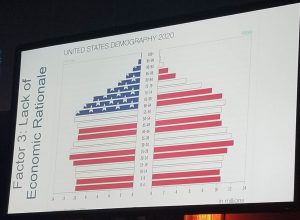 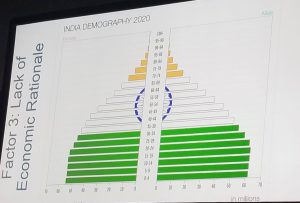 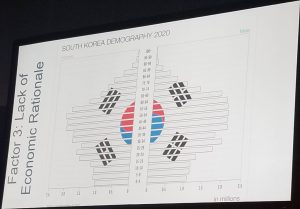 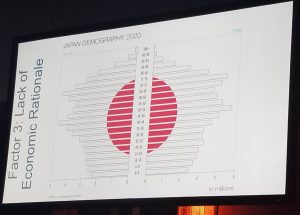