Harvest if off and running here around Central Illinois.   I traveled last week in Iowa and found that they virtually had not started anything but Seed Corn harvest.  I would expect that we will get a good week in here.  Some of the early yield reports are all over the board.  I am hearing anything from 270 bushel per acre corn down to 100 (not here in Central IL) and 40 to 80 bushels per acre for soybeans.  The one constant is the ear diseases in all areas.

The very wet August contributed to the rise in ear rots.  Ear rots typically engross the majority of an ear of corn making it very difficult to harvest and making it undesirable for the end user (elevator or buyer of the crop).  There may be a single ear in a row that has this damage or several ears in an area of the field.  The elevator “grades” the grain as it is delivered, scores it and applies discounts per their schedule.  A severely damaged load was delivered in the south and the discount was $1.40 per bushel for the whole load.  Right now I don’t expect much discount but should harvest be delayed due to excess moisture it could be more of a problem.  I have attached a picture to show what I am talking about. 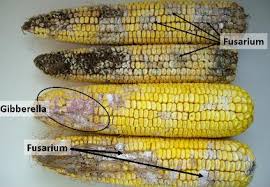 I will update the blog in a couple weeks as we continue to progress in Harvest 2016.